One of the carnivorous plant lists I’m on has been buzzing a bit lately about an article that appeared in the Botanical Journal of the Linnean Society, “Murderous plants: Victorian Gothic, Darwin and modern insights into vegetable carnivory.” (See the abstract: here.) What really got things going was a sensationalized story in the London Telegraph, with the catchy title: “Tomatoes can ‘eat’ insects!” (The exclamation point is mine, but it seemed right for many titles published by the Telegraph.)

The basic premise is that hairs on tomato plants can catch and kill some small insects. The dead insects fall to the ground and nourish the plant. The botanical technique is called “passive carnivory,” in opposition to the active carnivory practiced by plants like sarracenia that have means to both capture and digest prey.

It’s kinduv a stretch, pulling a number of plants into what before was a select club of carnivores. The Telegraph article mentions “petunia, ornamental tobacco plants, some varieties of potatoes and tomatoes, and shepherd’s purse, a relative of cabbages.” The Linnean Society abstract goes on to mention plants “such as Stylidium (Stylidiaceae), some species of Potentilla (Rosaceae), Proboscidea (Martyniaceae) and Geranium (Geraniaceae), that have been demonstrated to both produce digestive enzymes on their epidermal surfaces and be capable of absorbing the products.”

That got the carnivorous plant folks to stretch the definition further. What about New Zealand’s bird-eating para ara tree? Maybe even the California fan palm with its hazardous sawtooth petioles? While I’m at it I might as well add one of my own nominations: eucalyptus, the Australian widow-maker. After our windstorm Monday night I noticed all sorts of eucalyptus branches on the ground. If you were around when some of the eight-inch-thick branches fell off, you’d be on your way to being nourishing compost for the plants!

I enjoy odd botanical science stories, and this was one of the stranger ones I’ve read in a while: Plants will look after clones of themselves but won’t lift a petal to assist an unrelated plant of the same species. That’s the controversial result of a study published in Ecology Letters and publicized in yesterday’s BBC Magazine.

Richard Karban of the University of California, Davis and Kaori Shiojiri of Kyoto University in Otsu, Japan studied the Great Basin sagebrush, Artemisia tridentata. They found that there’s a chance that a plant will alert another identical clone of a species when danger is near. But when two unrelated Great Basin sagebrushes are placed next to each other, the strangers won’t do anything to help each other out. (How the plants communicate wasn’t part of the study. Details…)

(Left: Artemisia tridentata. Britton, N.L., and A. Brown. 1913. An illustrated flora of the northern United States, Canada and the British Possessions. Vol. 3: 530.)

These findings sound a lot like another study I’d mentioned just a little a year ago, where seedlings from the same parents will coexist happily in a pot, while seedlings of the same species that come from different parents will try to out-compete each other. Similar processes might be going on in both of these studies.

All this is interesting when you think about horticultural plants versus wild populations. Many plants in horticulture and some in agriculture are grown from cuttings, or are grafted or budded or layered. Each resulting plant is a clone of another and will have identical, predictable characteristics. If you buy a Fuji apple tree, you’d like to be assured that you get a Fuji apple, not a random seedling.

According to findings in the new study, identical horticultural plants might actually have some temporary advantages. For instance one plant might help its neighbor brace for immediate hazards in their environment, maybe something like an insect attack. (Someone should try out how a pot full of cuttings behave compared to the same species grown from seed from unrelated parents.)

While gardeners might enjoy predictability, biologists would still say that this is a bad thing from a long term evolutionary standpoint. An ailment that could wipe out one plant could wipe out all the plants with identical genetic makeup. Nepotism among clones of the same plant might be useful for the plant’s immediate circle, but is likely to be a dangerous thing for the future of the species.

And you may have heard the followup story this week: Cows grazing around power lines faced in random directions because the electromagnetic fields generated by the power lines disrupted the cows’ internal sensors.

I was curious. If cows can have their internal systems messed with by power lines, what about plants? I did a quick web trawl and found all sorts of evidence that electromagnetic fields could in fact effect plant growth, though bioelectromagnetics is a field that hasn’t seen a huge amount of research.

One study “showed significantly greater wet root weight and significantly smaller stem diameter and dry seed weight at the end of the experiment in exposed plants compared to control plants.”

And I ran across an email response by Shireef Darwish, a grad student at the Department of Plant Science at McGill University, to the question “do magnetic fields have an effect on plant growth?” The explanation is worth reading, and includes an extensive bibliography that points to further effects of electromagnetism on plants.

Outofdoors recently did a great post that reminded us that it would make so much more sense to generate power with solar cells at the point of use in the city than to deploy solar arrays in the desert, destroying big swaths of fragile desert.

In addition to eating up the desert, I’d add that remote generation would require the power companies to deliver the power to distant cities, most likely over high tension lines. All of you can probably speak from personal experience that the power line roads that the electric companies gouge through the landscape beneath the lines do plenty to disfigure the landscape and to provide fertile open space that might encourage invasive species. Not a pretty sight. And then there’s the issue of the electromagnetic fields.

It’s been known for a while that a fluorescent tube placed underneath high-tension lines would glow just from the fields. (The effect is observable underneath the lines that carry the hugest amount of current, not necessarily the lower-capacity transmission lines.) There are at least two art projects that take advantage of this phenomenon, both to power the bulbs and to get us thinking about what it might mean for us to have these power lines in our midst. 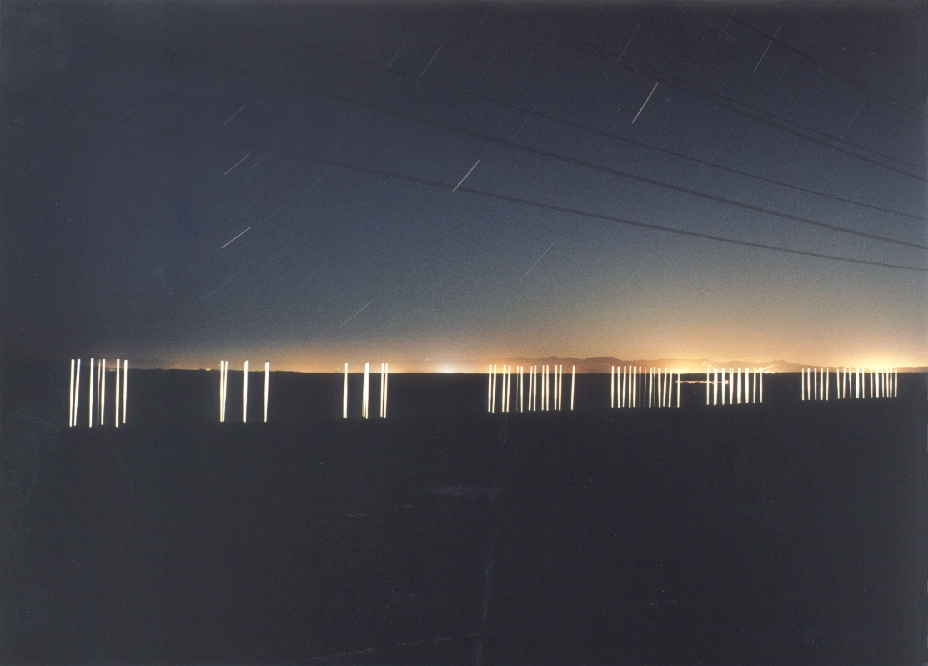 I met Larry and Debby Kline here in San Diego during 2003 when they had an opening of their artwork at a gallery across the street from a gallery where I was showing my own work. They were part of the way through this project where they made sculptures of fluorescent tubes beneath some of the high-capacity power lines that run through California. One project used 30 bulbs, another 60. (A tip from the Klines: The bulbs light up best when they’re standing on end.) After assembling the sculptures, they made striking photographs of them.

And then, in 2004, British artist Richard Box used 1301 bulbs in this installation.

I don’t want to get all hysterical over the potential effects of these electromagnetic fields, but they obviously have some effects on animals and plants. While the power lines may be no more dangerous to your health than your cell phone or microwave oven, I can’t help but think that this is yet another poorly-designed and unnecessary science experiment that we humans have dropped into the landscape. There’s no doubt, though, that at least the power line roads have their impacts.

The bicentennial of the birth of Charles Darwin (on February 12, 1809) is approaching. How many other people have contributed more to our understanding of natural history? I say, it’s something to celebrate!

Here are some botanical-themed anagrams using the letters of his name. They were generated using the Internet Anagram Server, a totally magnificent way to spend your waking hours. (With 7974 anagrams to choose from I’ve probably missed a few other choice ones.)

The first one is so concise and poetic it makes haiku look verbose.

…and last but not least:

[ Image to the right from the Cedar Chair Store website ]